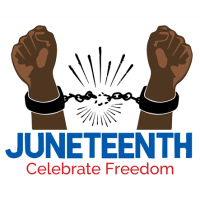 Juneteenth
The End of Slavery in the United States

WHAT IS JUNETEENTH?
Juneteenth, also known as Freedom Day, Jubilee Day, and Cel-Liberation Day, is an American holiday celebrated annually on June 19 commemorating June 19, 1865, when Union general Gordon Granger read federal orders in Galveston, Texas, that all previously enslaved people in Texas were free. This signified the emancipation of the last remaining enslaved African Americans in the Confederacy.
WHY DO THEY CALL IT JUNETEENTH?
Texas was the most remote of the slave states, and the Emancipation Proclamation of January 1, 1863, was not enforced there until after the Civil War had ended. The name of the observance is a portmanteau of "June" and "nineteenth", the date of its celebration.
IS JUNETEENTH A NATIONAL HOLIDAY?
Currently, Juneteenth is not a national holiday. Nearly all states recognize Juneteenth with some limited special status, but there have been calls over the years to make it a national holiday.
Many companies are establishing Juneteenth as a company holiday. Locally, this includes Target, Best Buy & U.S. Bank.
HOW IS JUNETEETH CELEBRATED?
Despite the lack of federal recognition, the holiday has lived on through rich traditions, including lively celebrations in the form of festivals and parades with local bands playing, storytelling, picnics, and a Juneteenth staple — barbecues. In fact, Minneapolis has been home to one of the largest Juneteenth celebrations in the country. It is also a time to reflect on the racial injustice and trauma our country has experienced.